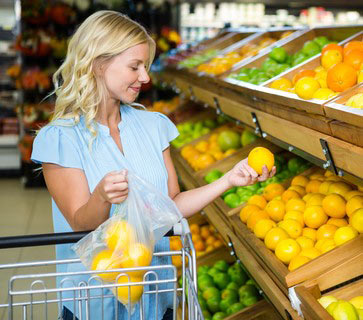 Compostable polythene bags are safer, greener alternatives to the conventional plastic bag. Developed in response to environmental changes, compostable and degradable bags break down more quickly and over time are expected to make the task of reducing waste a lot easier. Organisations that rely heavily on bags for packaging and disposal of waste, including supermarkets, food manufacturers and hospitals are among those in the UK who have already made the switch that will reduce plastic waste by thousands of tonnes per year.

What’s in the bag?

While compostable and degradable bags share the feature of a shorter lifespan, they are different in two important ways. Compostable bags are broken down and converted into carbon dioxide, water and biomass, by naturally occurring microorganisms like bacteria, fungi and algae.  Degradable bags, on the other hand, are broken down by heat, moisture and exposure to UV rays. This difference creates a disparity in degradation speeds, and degradable bags take much longer to break down to a point where their molecules are small enough to be consumed by microbes.

Compostable bags can be made from a variety of different materials derived from renewable resources like corn, wheat, tapioca and potato, as well as polyesters. In contrast, degradable bags are often produced by introducing an additive like calcium carbonate to the polyethylene used to make conventional plastic bags. This modification reduces the use of plastic, speeds up the production process and even improves the strength of the bags.

Compostable polythene bags are much better for the environment than non-biodegradable plastic bags, not only because they take less than half the energy to produce but also because they release far fewer harmful chemical and toxins when breaking down in the presence of oxygen. Once fully degraded, compostable bags can be safely absorbed by the earth and earn their name from their ability to be added to the compost heap as a source of manure. Not as robust as either the non-biodegradable or degradable bags, however, compostable bags are not suitable for every application and can have a shelf life of merely weeks.

The more robust degradable polythene bag can take from as little as 6 weeks to 2-3 years to degrade. One ironic advantage degradable bags have over compostable ones, is that in the absence of oxygen they will not break down. Compostable bags, on the other produce the greenhouse gas methane when no oxygen is present.

A reduction in waste and pollution does not rest solely on compostable and degradable polythene bags. The combined effects of greater public awareness on how to recycle and the plastic bag tax in the UK have all helped to improve peoples understanding on ways to help the environment which is great for everyone including future generations.

Polythene bags still outweigh any other type of bag in terms of efficiency when compared to the other options available.  Making note of how robust the bag will be for what it will carry will help you when deciding what bag best suits each customer!